To all those working Moms out there 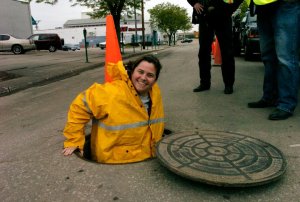 Yes, I did go into the storm sewers to find a story.

When I was a working mom, I’d often fantasize about quitting my job and becoming a full-time Mom.
That’s Mom, with a capital M. As opposed to the frenzied working mom I was. You know – the type who suspects they aren’t doing their best at either work or home.
That was me.
On a day when my daughter needed to go to the orthodontist and son needed his allergy shots or there was a parent-teacher conference going on at the same time as a City Council meeting, I’d tell my boss, “Who has time for a job?”
But in the words of Tim Gunn, you make it work. And move on to the next day.
If only I didn’t have to work, I’d say to myself, I’d start my day with a workout at the nearest health club, lunch with my unemployed friends, maybe some shopping at Talbot’s, and be home in time to have warm brownies waiting for my kids.
And books! I’d finally have time to read more than my Newsweek, Governing and People magazines. I’d spend an hour or so every day reading a real book.
I’d tackle home renovations – learn how to lay tile and stain concrete.
I got my chance to make these dreams come true (well maybe not Talbot’s, but Target) when I quit my job a couple of months ago. Hello, Five Willows! Goodbye three-hour City Council meetings!
But a funny thing happened: I’d also fantasized about starting my own blog, and almost immediately after I quit, I began working to make that happen.
About two weeks into my unemployment, I realized I was working more hours than when I had a job. I’ve since put a stop to that insanity, but I still find myself driven to work on this blog every day.
I do some freelance writing to support my blogging habit.
I have not yet joined a health club. I jog or walk almost every day – but usually my days are too busy to get in a workout before the kids get home. Same as when I was working.
Shopping? Now that I work from home, where I can wear pajamas all day if I want, I’m not inclined to buy new clothes. In fact, I’ve only been to the mall a couple of times in two months. My son has remarked on my frequent choice of clothing – yoga pants.
Warm brownies? Not once. Really, do we need to put all those calories in their mouths? Care for an apple?
Books? I picked up Fast Food Nation after half-finishing it a decade ago, and I’m starting the Tipping Point by Malcolm Gladwell. But I still read more magazines than books.
Home renovations – I stained the concrete in my basement (it didn’t turn out right) and am knocking down a wall, but spend more time blogging than tiling.
I am home when they get out of school – and I like that. Problem is, they’re teenagers and seem to prefer to spend time with their friends after school.
It has been easier shuttling them around to their doctor appointments and guitar lessons and basketball practices. I sometimes wonder how I did it when I was working.
When I used to complain about how much I wanted to Just be a Mom, my husband would tell me I would go crazy doing that. I’m not going crazy, but he has pointed out that I’m doing much of the same work I used to do, except with more flexibility and NO PAYCHECK. (For now, until my audience grows the point where I can start selling ads.)
He’s perplexed, and so am I.
Life as a Mom is much the same: My to-do list never ends. I still don’t know what we’re having for supper until approximately two minutes before I begin making it, or ordering it. I have not yet taken down the Halloween decorations.
Perhaps if I’d won the lottery, I would be spending all my time lollygagging, shopping and exercising. But I doubt it. Turns out, there’s little difference between being a Mom, and being a “working mom.” Same difference.