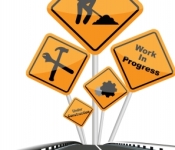 PART ONE IN A SERIES OF STORIES
BY DEENA WINTER

About two years ago, Roger Helmick was one of dozens of employees in the city street maintenance department who were so frustrated with the way their division was being managed that they called the newspaper.

I met them in the brick-walled, spartan Labor Temple in northeast Lincoln. The room filled with burly men who looked like they’d just come from doing one of the jobs that keep this city running — pushing snow off the streets, patching streets with hot asphalt and mowing grass.

It can be dirty work on the hottest and coldest of days – but they weren’t there to complain about that. They were there to talk about how the streets division of public works had degenerated into an Animal Farm-like atmosphere where a few good ’ol boys ran roughshod through intimidation, humiliation, nepotism and retaliation, which they said produced a culture where:

• A few years ago, an employee showed up drunk to work and was sent home (driving his own vehicle) by a supervisor and a few hours later was seen driving around Havelock. He still works in the department and drives snowplows.

• In 2008, labor supervisor Ron Null showed people at work a video on his cell phone of him having sex with another city employee – he was fired three months later, even though the head of street maintenance maintains to this day that he should have just been disciplined.

• A “gang” or “family” of supervisors and their friends and relatives target people they don’t like, intimidating, belittling, harassing them, leaving them at work sites, spying on them and nitpicking their work in an effort to get rid of them.

• Last year, a relatively new employee, Eric Kohles, was instructed to use an old, notoriously unsafe mower to mow near a drainage ditch without any training – and the mower tipped over onto him and killed him.

• A supervisor used to pull a butterfly knife out and wave it around to intimidate people who would ask for time off, saying “denied” or threatening to fire them.

• Trust and morale is so low that about 30 employees have digital tape recorders that they take everywhere and use surreptitiously, in case they’re confronted by a supervisor and don’t have a witness with them. The recorders are allowed by a union contract.

But that day in the Labor Temple, the workers were afraid they’d lose their jobs if they went public with the problems – and allowed their names to be published in a story.

I took pages and pages of notes and put them away, waiting for the day that someone would have the courage to speak up.

It would be a long wait.

Working your way up, getting knocked down
Roger Helmick was no wallflower, but that day at the Labor Temple, he wasn’t about to risk his job by going public about problems in the city department.

Nine years ago, he moved his family to Lincoln from Falls City so his deaf daughter could get better school services. He started working on an asphalt crew – the lowest rung in the division – trying to feed a family of five on about $8.50 an hour. It was hot, dirty, smelly work, hammering out damaged concrete and filling holes with asphalt.

But he worked his way up and by this year, he was earning more than $20 an hour as a heavy equipment operator and crew leader.

A few years ago, Helmick became a union steward and stepped up to help an employee who was being so harassed, screamed at and belittled by a supervisor at the South Street shop that he claimed to have lost about 60 pounds from the stress.

Roger Helmick worked for the streets department for nine years, before recently being dismissed in what he believes was retaliation.

Stress levels in the division peaked after one of the street maintenance employees was killed on the job. About a dozen employees filed a grievance against the city and three public works officials – particularly their boss, Scott Opfer — saying they’d ignored their warnings that some city mowers were unsafe – leading to the accident last year that claimed the life of their 37-year-old coworker, Eric Kohles.

Employees say Kohles had never operated the antiquated, three-wheeled Heckendorn mower before, and was assigned to mow steep terrain near a drainage ditch, where it tipped. Opfer says Kohles had operated it before, but was mowing it in the wrong area.

In November, at the mayor’s request, the Lincoln Police Department began an investigation into the Kohles accident. Initially, the police chief said the investigation should take 30 days. Five months later, the police have still not released their conclusions.

Helmick was one of three employees who filed a grievance in January, when employees were forced to go home after a night of snowplowing so they wouldn’t get overtime. That went against the labor agreement, and the city eventually paid all the employees for eight hours of overtime they didn’t work.

But public works director Greg MacLean side-swiped Helmick by sending a letter to the employees who did not sign the grievance thanking them for “taking the high road” by not being part of the grievance.

A couple days later, Helmick’s name showed up as a witness in a case against Doug Hanson, a supervisor in the streets division who Helmick and other employees say targets, intimidates and berates employees. Two days later, Helmick was “put on asphalt” duty.

Within a week, he would be out of a job.

Tomorrow: The mayor’s office gets involved.