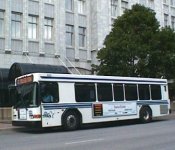 Good question asked by 1011 News reporter Keller Russell: What economic benefit does the city get from the $140,000 in federal stimulus dollars that were used to buy bike racks for Lincoln’s city buses?
Watch it or read it here: Tracking Your Stimulus Dollars: Bike Racks For Buses?.