Sheridan Boulevard ripped up for makeover 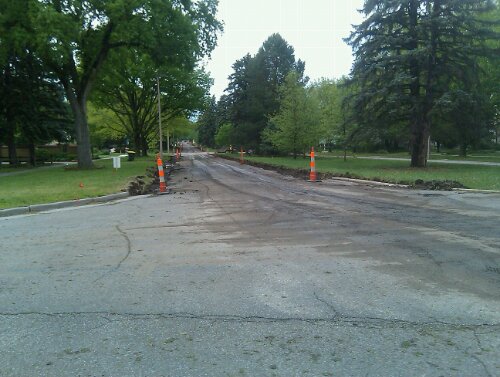 Sheridan Boulevard, which runs through the lovely Country Club Neighborhood, is getting a makeover that will take several months.
Detour signs went up Monday and the road is being torn up between South Street and 27th Street. The city is doing a mill and overlay, new curbs and gutters and some new sidewalks from South Street all the way to Calvert Street. The $1.2 million project is being paid for with city wheel tax dollars.

I was surprised Sheridan rose to the top of the list of importance, given there are many, many worse-looking streets in Lincoln. But a few years ago, when I had the same question about why the road in front of my house made it on the city’s to-do list, I was told some streets are so far gone that it really doesn’t make sense to just resurface them. And the city can’t afford to totally redo them, so less damaged roads get done first. So there you go.

The project was originally scheduled to be done in 2010 with federal stimulus money until city officials realized they wouldn’t be able to meet the feds’ aggressive “shovel ready” deadlines given the Country Club Neighborhood’s recent national historic designation. The historic designation requires that the impact on the district be examined first.

The Sheridan Boulevard work is expected to last four or five months.