BN trains may have to be rerouted from Lincoln to Kansas 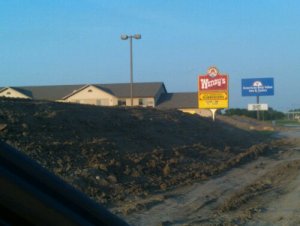 The Wendy's and a hotel near the intersection of highway 2 and Interstate 29 are closed and surrounded by a dirt dike. The sign on the hotel said "Lakefront property for sale."

A Burlington Northern Santa Fe Railway spokesman said flooding along the Missouri River may cause trains to be rerouted between Lincoln and Kansas.

BN spokesman Andy Williams said today that about 40 trains — most of them carrying coal from Wyoming — travel daily from Lincoln to Napier, Kan., but that route may change.

“We’re hoping not to have to reroute them,” he said.

If that happens, the trains would likely go from Wyoming south down the Front Range.