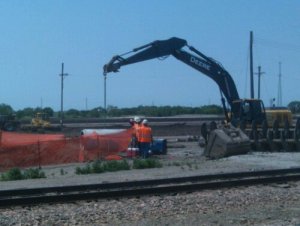 Construction workers near the site of a diesel spill that's being removed from the area where a new arena will be built west of the Haymarket.

Burlington Northern Santa Fe Railway has been largely silent during the past several years, as Lincoln has embarked on its plan to convert its
dusty downtown railyard into a $340 million arena and shops.

But now, BN has spoken up.

Don’t know if you saw it, but BN spokesman Andy Williams wrote a letter to the paper trying to set the record straight on what is going on with that extra $3.4 million BN wants from the city in order to get relocated as fast as the city wants it to. BN has been taking a beating in the blogosphere for requesting an extra $3.4 million to move out of the city’s way.

Williams laid out all the delays that have occurred — saying the city was eight months behind schedule in executing agreements and acquiring property for excavated material, six months behind schedule in providing environmental reports to BN and buying the Union Pacific property and two months behind schedule in awarding sanitary sewer work. Williams says “these are just some of the examples of delays” that prevented BN from beginning construction in June 2010. He says construction did not actually begin until March 2011. Which is funny, because all along the taxpayers have been assured that everything is on time, and on budget. Doesn’t sound to me like this train is on time at all, my friends.

“That is much later than the dates even specified in the agreements, yet the completion date of September 2012 has not changed,” he wrote.

Again, I think the city ought to explain to taxpayers — you know, those people footing the bill for this project — what has caused the delays. I’ve asked city officials, and they won’t say. I’ve asked Williams, and he won’t say either. But his letter seems to imply that the city is behind the curve, not BN.

Williams did assure me that BN has a good relationship with the city, despite this little delay problem.

“I would characterize our relationship as very good,” he told me.

Let’s hope between the two of them, they can bring this train in on time.