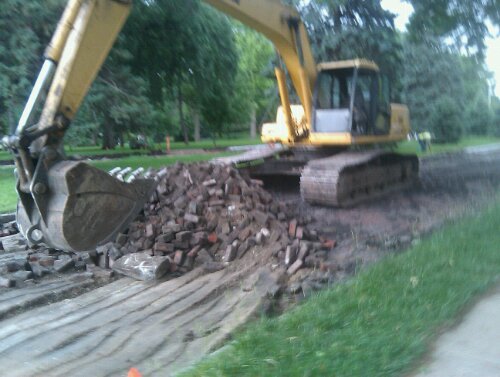 Sheridan Boulevard is in the middle of a million-dollar-makeover — that’s why the historic street is blocked off with detour signs right now — and tons of bricks are coming up with the pavement from the days when Sheridan was paved with bricks.

As you can see in my photo, beneath the pavement is a layer of bricks. And although the city considered converting Sheridan back to a brick street again, ultimately they decided against that route. (Darn! Lincoln’s few remaining brick streets are one of my favorite things about this city.)

Some adjacent homeowners asked the contractor if they could have some of the historic red bricks, so the contractor, Dobson Construction, has been keeping a few piles for people to scavenge bricks. A worker told me today the bricks go fast.

But please, don’t go looking for bricks when they’re trying to build a road. You could end up with brick on your face.

The city is doing a mill and overlay, new curbs and gutters and some new sidewalks from South Street all the way to Calvert Street. The $1.2 million project is being paid for with city wheel tax dollars.