Lots of stuff happening over at the paper these days…

Wow… it’s hard to keep up with what’s going on over at the Lincoln Journal Star these days.

I’m told eight veteran newsroom workers recently agreed to voluntary buyouts that were less than generous — putting the newsroom on edge about whether that’s enough cutting to stave off layoffs.

The buyout was offered to employees with at least 15 years of experience — and if those positions are left empty, the difference will definitely be felt in a newsroom of about 50 employees. That’s a 16 percent reduction in staffing, if my math serves me. But perhaps they will fill some of those positions with cheap, young workers.

And then today comes news that a new publisher has been named: Julie Bechtel, who worked at the Journal Star as circulation and operations manager before leaving in 2002 to become publisher of the Bismarck Tribune in Bismarck, N.D., and then moving to the Quad-City Times in Davenport, Iowa, in 2005.

Yes, I worked for Julie in Bismarck. I found her to be an unorthodox publisher — she is definitely not a boring, stuffy suit. Far from it. I could tell you some stories.

As with most publishers, the bottom line was paramount with Julie. I remember one morning at the daily reporters’ meeting, a reporter was all excited about doing a story about a person who’d found a tiny, live lizard in her head of lettuce bought at the local grocery store. They’d even gotten a produce employee to talk about it, and they’d rather wisely said it’s not that big of a deal when you’re buying lettuce from South America, for example.

I just laughed though, because I knew there was no way in hell that story would get in the paper. Grocery stores, you see, are newspapers’ bread and butter, so to speak.

Sure enough, by day’s end, Julie had spiked the story. She said she’d consulted other Lee publishers before making her decision. Something about how the story lacked news value…

Of course, it was a rarity for Julie to get involved in such a decision. But I love unorthodox managers and found her to be a barrel of fun and fair on other important matters, so it should be interesting to see what she does with Lincoln’s newspaper.

However, with buyouts underway and layoffs looming (?), becoming publisher in Lincoln may not be that fun right now.

Remember awhile back when Lincoln put in a bid to be Google Inc.’s testing ground for a new lightning-fast Internet service?

We didn’t win the nationwide contest — but the winner isn’t too far away. Kansas City, Kan., beat out its big brother to the east, Kansas City, Mo.

Republicans about to lob a green grenade at Beutler Inc.? 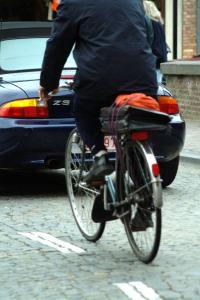 Local Republicans are preparing to launch an assault on the Beutler administration for being part of an international group that promotes sustainable development and conservation.

Looks to me like the Republicans running for office in the city election are about to launch a green grenade at Mayor Chris Beutler’s administration.

I received a copy of an email that’s circulating around town inviting people to a March 25 meeting to talk about what is portrayed as Beutler’s sinister moves to cram sustainable development down the throats of Lincolnites. The flier starts off saying, “Have you heard about the REAL cleaner, greener Lincoln?” “Where is Mayor Beutler taking US?”

The flier says Beutler joined the group without a vote of the people or the City Council’s knowledge. It says Beutler has plans in place for “denser pack ’em, stack ’em housing” in Lincoln — which it says limits “freedom of choice of where we live.”

They also warn that the Beutler administration plans to increase government regulations to stifle entrepreneurs and business expansion and that “smart meters” will be in place by 2014, monitoring energy in Lincoln homes and businesses with “the ability to turn our power up and down without our knowledge?”

This sort of green grenade was also launched at a Denver mayor during the gubernatorial campaign in that state last October. According to the Denver Post, a Republican gubernatorial candidate said the mayor’s seemingly innocuous bike riding program and other environmental programs were actually intended to “convert Denver into a United Nations community” and were a threat to people’s personal freedom. He said ICLEI puts the environment above citizens’ rights.

Certainly, Lincoln’s green efforts have stepped up since the city received a $2.4 million federal stimulus grant in 2009 for efficiency programs. A new mayoral aide, Milo Mumgaard, was hired to launch the city’s “Cleaner, Greener Lincoln” program to make city government more energy-efficient — although as it has evolved, the program has expanded beyond city government to encourage all of Lincolnites to conserve energy. You’ve probably seen signs, billboards and advertisements around town.

However, alleging they’re part of some sinister plot to discourage development and submit to U.N. control — well, I’ll be interested to hear them connect those dots.

According to the flier, all of the Republican candidates in the spring city election will be at the meeting: Mayoral candidate Tammy Buffington and City Council candidates Chad Wright, Melissa Hilty and Travis Nelson. I asked Camp about it, and he said he was invited to a meeting about it — but couldn’t make it — and was surprised to see his name on this list.

The meeting is at 7 p.m. at Calvary Community Church, First and Superior streets. Don Raskey will be giving a presentation based on his research.

Half a million in TIF for former Meadow Gold milk plant

The Lincoln City Council today considers approving more than a half million dollars worth of tax increment financing, or TIF, to help developers convert the former Meadow Gold milk processing plant into mixed uses for now, and commercial and residential uses later.

According to city documents, they will be converting the plant into “high tech industrial manufacturing,” office space and a brewery. The public assistance (TIF) “may” be used for streetscape and facade improvements and geothermal energy improvements.

Since the city declared that area south of the Haymarket blighted way back in 1984 (and again for the arena project, I believe), that opens the door for this kind of redevelopment.